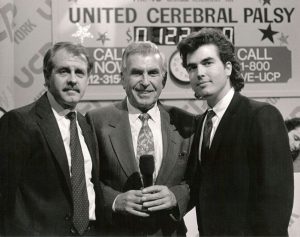 Television pioneer Dennis James began his career in radio in New York City, moving on to television in its earliest days. Actor, announcer, sports commentator, host of a long series of successful game shows, he was also a trusted commercial spokesman for major companies. It can truly be said that he experienced and enlivened every aspect of the entertainment industry during his 59 years in show business. 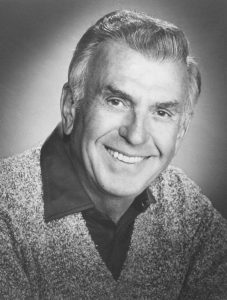 Of greatest importance to Dennis was his charitable work. For 47 years Dennis James served as the host of the UCP telethons which raised over 700 million dollars.  Dennis James was honored by UCP National in 1965 by then President Eisenhower, with the “Humanitarian of the Year” award, for his lifetime achievements. In 1992 his star was placed on the Hollywood Walk of Fame. In 1996 Dennis also received a star on the Palm Springs Walk of Stars.

Dennis James bought a home in Palm Springs, California in 1980. He was then called on to host dozens of charity events year round in the Palm Springs area, including events for Childhelp International, The Frank Sinatra Golf Classic, and the Bob Hope Desert Classic. In 1996, Jan Warner, the affiliate’s Executive Director, asked Dennis and Micki James to host what would be called the Dennis James Celebrity Golf Classic. When Dennis passed away in 1997, Mrs. James continued the tradition with the 2015 event being the 20th annual Dennis James Celebrity Golf Classic. Over the years of the Golf Classic close to $2 million dollars had been raised to support the programs and services provided by United Cerebral Palsy of the Inland Empire.

In 2000, United Cerebral Palsy of the Inland Empire honored Dennis by naming their original facility in Cathedral City the United Cerebral Palsy Dennis James Center. By 2018 UCPIE had outgrown this facility and moved its administrative offices to its current location in Rancho Mirage. The James family continues to support UCPIE by actively participating in events and by sitting on UCPIE’s board of directors.